Is buy to let dead?

Is buy to let dead? With that opening statement maybe you would expect me to be talking about how awful it is to be a landlord? How all the legislative changes over the last few years have made it not worthwhile?

Spoiler alert – not the case!

If you have stayed in the market over the last two years, you will be seeing above-average rental increases and higher returns.

If you have cashed in over the last two years, you have achieved your capital asset growth, paid a chunk in agents fees and capital gains and now look forward to, admittedly, a quieter life with no additional income.  Just so you know I am rather biased on bricks and mortar in planning for my pension…

So why does buy to let work?

In England we do not have enough housing, so there is a great need for property. This need will be growing as forecasts show that our population (between 15 and 24) will grow between now and 2030 by 11%. Meaning, another 866,000 people will be looking for an affordable home.

Why do people rent?

The average price of sold homes in the local area (excluding Cambridge city) is just over £300,000. This means, on average, a down payment of £30,000 and an outgoing of £1200 per month, so quite a few people will not be able to go down this route. Also, some people just don’t want the hassle of dealing with the day to maintenance of a home.

How big is the PRS?

It is estimated that the PRS (private rented sector) makes up about 20% of the households in the UK (which has risen from 9% when I become a landlord in 1995). The PRS is supported by private individual investors.  It is predicted that the number of people renting a home will increase to 25% in the next 10 years.

It has been reported that 230,000 homes need to be added to the PRS per year to meet the targets set by the Government.  Capital Economics, an economic consultancy, has reported that the 230,000 homes are needed to compensate for the expected decrease of 540,000 homes in the PRS as more mature landlords exit.

However, there is a new breed of landlord entering the market at the moment. Their expectation on returns is different to someone who has been a landlord for say 20 years. They can see the benefit of capital growth and as regular income and want to supply a warm and safe home to the tenants that live in the property. They understand that legislation is high, but help and guidance is there to miss the minefields.

What yields can I expect?

Investor returns in East Anglia have rapidly increased over the past year, rising by 1.4% to bring investors annual returns of 6.8%. Fleet Mortgages Rental Barometer shows these improved returns have been driven by Norwich, Peterborough, and the outskirts of Greater London. When buying new in the area, we are seeing Landlords achieving an average of 5% on a freehold property.

In fact, East Anglia has faired much better than nationally where most areas have seen a drop in return. It has been suggested that this could be down to a change in behaviour from tenants – more working from home and therefore seeking larger properties with outside space than they can afford further into London. I would add that we have a good and a solid employment base, with quick links to London

What should I do?

That answer is very much down to you. Being a landlord means you are running a business that deals directly with people. This may not suit some, but I have always found that if you treat people fairly they will reciprocate.

Over the last few months I have spoken to quite a few people who are starting the thought process of becoming a landlord. Most of whom have decided to invest in Buy to Let. All I can say is that the figures say buy to let is here to stay and those that have stayed in the market have very much benefited from those that have left.

If you want any help with deciding if Buy to Let is for you, have a look at our Guide to Property Investment. 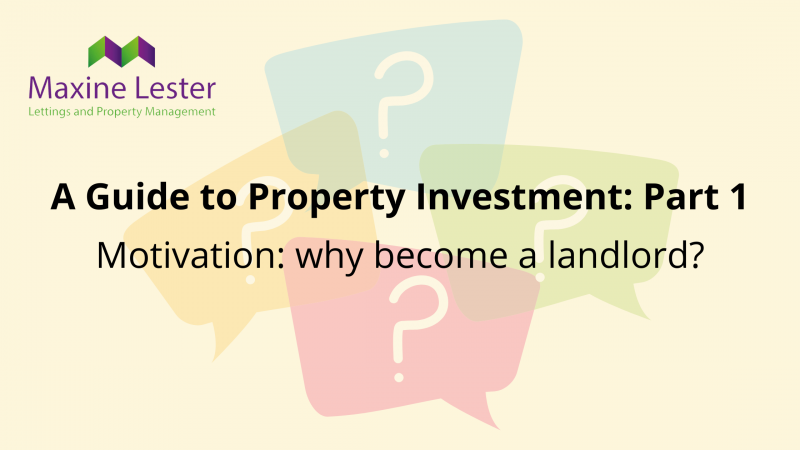