Our tribute to Remembrance Sunday

I am sure that everyone has their own story of heroic family members who served during the 1st world war, so today we want to tell you the story of Matthew Lester’s ancestor, Albert Edward Lester, 2nd Lieutenant in the British Army, 13th Battalion London Regiment.

World War One was one of the deadliest conflicts in the history of the human race, in which over 16 million people died. The total number of both civilian and military casualties is estimated at around 37 million people. The war killed almost 7 million civilians and 10 million military personnel. The largest battle of World War 1 was called “The Battle of the Somme” and it is known as one of the bloodiest battles in history. It was fought by the French and British against the Germans on both sides of the River Somme in France and lasted for more than five months. Over a million men were killed or wounded during this battle, and it was the first time that a tank was used in combat. 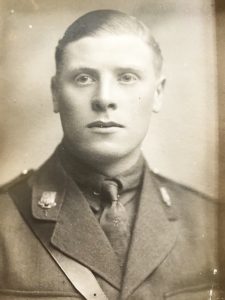 Great Uncle Albert joined the City of London Regiment in October 1914 as a Sargeant, being posted to Gallipoli, Egypt & France before becoming an Officer in 1916.  He was twice mentioned in despatches before being awarded a Military Cross “for conspicuous gallantry and devotion to duty when in command of a raiding party”.
Sadly, at the young age of 22 he was reported wounded and missing, after leading a raid, overcoming the enemy with his expert leadership and saving many lives in the process. He had been at war since he was 18 years old.

If you think about how young and brave the men were, and how we are all still here today due to their sacrifice, it is pretty amazing.  I hope that everyone will continue to share their stories and honour the soldiers at a local service this Remembrance Sunday (listed below). 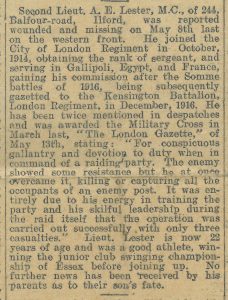 Soldiers only got to sleep in the afternoon during daylight and at night for an hour at a time. During rest time they wrote letters and played card games.

Here is a rundown of events for this Remembrance Sunday November 11, 2018: