“Smudge, are you seeing what I am seeing?”

“I’m not sure, I think I have been temporarily blinded!”

“That confirms it, you are looking at Maxine trying to outshine a big celebrity.”

“You know that Maxine doesn’t like to be out-shone.”

“Well, this time it looks like she has pulled it off.”

“She certainly has on the awards front, look at that trophy!”

“Not sure she pulled it off with the cerise outfit mind (puts sunglasses on).”

The Maxine Lester Lettings & Property Management team were up for 3 Major Industry Awards, being presented by The Negotiator Magazine.  It is a huge achievement to be shortlisted for one award, let alone THREE:

The excitement was magnified because the Awards Ceremony was being held at the stunning Grosvenor London Marriott Hotel in Park Lane.  The Great Hall Ballroom is astounding in Art deco style and the Queen learned to ice-skate on the ice rink which used to be inside the hotel and is now under the ballroom floor no less!  And the compare for the night was the hilarious comic Julian Clary! 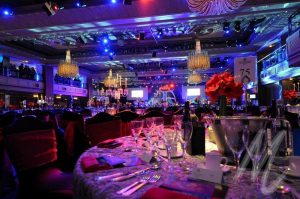 The only negative incident of the entire day was the fact that Maxine completely forgot to give Julian a call to check what outfit he was wearing.  Oh boy, was there a clash of cerise when Maxine was called to the stage… AS THE WINNER of not one, not two… but THREE AWARDS! 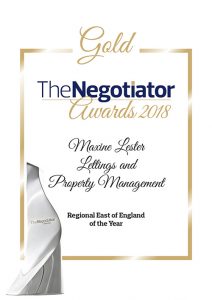 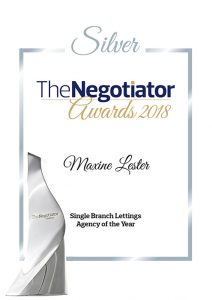 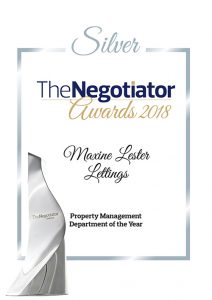 We hope that our customers are also delighted to be working with an agency who can put up a great fight against the big boys, and understand that we could never win awards if we couldn’t show how much our clients mean to us.