Blog from the Dogs – Our Team Remembers

“Smudge, do you know what the team are up to this week?”

“Yes, they are all writing about the family members who served in the World Wars. I’m researching ours too!”

“We didn’t have family in the war, we’re dogs.”

“You don’t understand, up to 20,000 dogs were trained for front-line duties during World War One.  They carried aid to the wounded, took messages between the lines, pulled the guns and sniffed out enemy soldiers.  In fact, dogs were deemed so important that in the early months of 1917 the War Office formed the War Dog School of Instruction in Hampshire.”

“You’d have been great at the sniffing part with that nose of yours!”

“Well I actually discovered our great, great, great grand-doggy Burt was in the trenches and he helped to find many wounded soldiers.  He was also lucky to come back home safe and sound.”

“Wow, just think, we wouldn’t be here if he’d not been so lucky.” 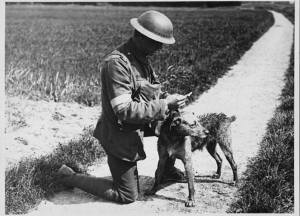